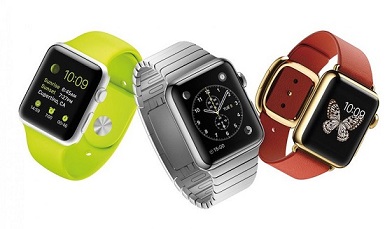 Many reviews have been negative that this watch is just like any other smart watch and is more expensive. There are some downsides to this watch for a mass market. The Apple Watch only works if you have your iPhone with you or a certain distance away from you. This means that anyone with an android phone cannot operate with this watch. The battery life is also very short on it; reviewers report that the watch only has about an 18-hour life so it requires charging every night. Some really nice features of this watch is the “Activity and Workout” apps that allow you to monitor your heartbeat, keep track of burned calories, and any active exercise that is done and rewards you when goals are completed. This feature is similar to a Nike FuelBand or Fitbit products. The new watch is similar to a glorified iPod Nano with its app and music listening capabilities with more features. This new watch won’t come cheap! The first level, Sport, is $349 and range up to $17,000 for the 18 karat gold or rose gold encrusted Apple Watch Edition. All three styles also come in 2 different sizes of 38 mm and 42 mm. So does this watch sound like a luxury item such as buying a Rolex or is it logical to buy a watch with most of the capabilities of your phone for up to 56 times the cost? I personally don’t see the appeal, but I also am not a fan of regular watches in the first place. I am quite content with my iPhone doing everything I need for me.

Apple is by far one of the most innovative and cutting edge technology developers in the world. Their ideas are far reaching and high impact on the populace and more importantly the economy. That being said, it’s hard to justify creating a wearable (Technology that you out on your body) for such a high price point. You’re paying almost 2/3 the price of a full phone for tech that doesn’t have its own cellular capabilities. It’s a bit disappointing. To make matters worse, they include “luxury” versions at an outrageous price to make them more appealing to high end clientele. All of this for a piece of tech that, honestly, is behind the times. There are numerous additional devices that do everything that the Apple Watch does, some even more so, with a much lower cost of purchase. Combine that with the ability to sync with multiple types of phones, not just the iPhone, and you have a much more market friendly wearable. I appreciate that Apple is attempting to break into the wearable market with something “fresh” and “innovative” but I feel they fall a little flat compared to the vast majority of additional companies who have already opened that door and have been refining their product. While I’m sure in the future the Apple Watch will be a force to reckon with, at the moment it seems more like a gimmick for additional stock prices than a true market driven product. I’d steer clear for now and wait for better revisions. If there are any.

I was excited to hear about the upcoming Apple Watch.  And I considered pre-ordering one for myself until I saw the prices.  So I decided to wait until they released more information about what it can do and read some of the reviews.  Here’s some background information on my thought process:  I purchased the original iPad and now it will not update to iOS 8.   So now it is merely used as a game player for my kids who STILL prefer the newer iPads and iPhones over the first generation iPad due to screen resolution and the fact that it won’t load new games.  Due to this experience with the original iPad, I am confident with my decision to wait for newer versions of the Apple Watch.  Having said that, I understand this is the first generation of Apple Watch, but right out of the box, I think there are already a few things that Apple dropped the ball on.  There is no built in GPS.  It is also not a stand-alone unit for most apps.  It is basically a very expensive accessory to your already cool phone.  I understand the different models since it is something viewable and wearable and they have to address different fashion tastes.  But I was hoping it would provide a lot more features without relying on the phone.  Also, the battery seems to be an issue.  Most apps at this point are text-based too.  But, with all this said, it is still a really good-looking watch.  And I’ve had a glimpse of how it operates and functions.  I think Apple has done it again with looks and design, but I still plan to wait until the new versions come out with hope they will fix the battery issue and provide more separation from the Phone.