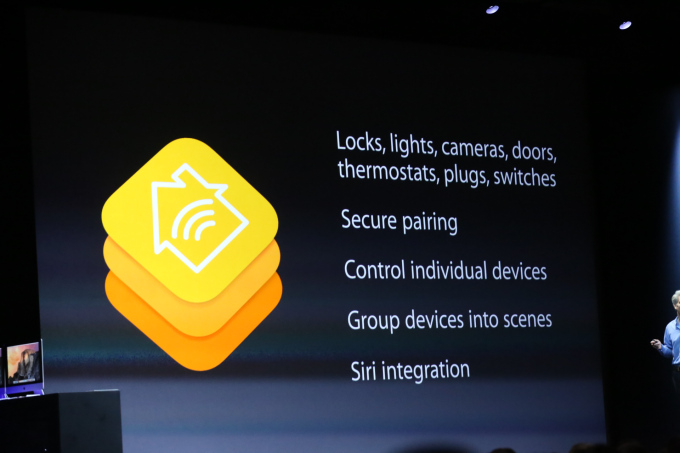 For a couple years now, there have been rumors and buzz about Apple entering the home automation game. Back in May, an article was released that at the Worldwide Developers Conference, Apple would introduce a system to meet your smart home needs that included lighting, security systems, and appliance control...

For a couple years now, there have been rumors and buzz about Apple entering the home automation game. Rumors gained more buzz after Google purchased Nest Labs, the smart thermostat that former Apple Executives actually created. Back in May, an article was released that at the Worldwide Developers Conference, Apple would introduce a system to meet your smart home needs that included lighting, security systems, and appliance control. There weren’t many details about the manufacturers or even the system itself except that everything could be controlled by your iOS devices.

Skip ahead to the conference, and Apple mainly focused on their new operating system releases for iPhones and Mac computers. The representatives only talked about their home automation potential. There is some information I came across after the conference on their App named HomeKit (which would be the central hub of their home automation system). The app would be accessible to our favorite iOS devices but only if they have MFI (Made For iPhone) software and wireless chip in the device. Though, their technology enables you to control the lighting, locks, thermostats and much more through the app or even better, quickly through voice commands with Siri. With strong end-to-end encryption, access to your home from the app will be very secure and private. So none of the commands will happen unexpectedly in the background, only when the user prompts an action or scripts certain conditions like turning the lights on at a certain time. Until these MFI products are available, this system seems like it will be put on the backburner, though it is possible to link your old equipment to the new Apple equipment when this does happen. There will be a bridge hardware that can translate the different languages on your current devices so the HomeKit can work in harmony with whatever system you have.

Over the past 10 years, Apple has shown us that nothing can seem too small by constantly advancing their iOS technology from year to year. Why not enter another innovative business that personally, I think Apple would greatly succeed at. Some are saying that these rumors were all teases that will never come true.
So what does this mean for all of us Apple lovers? There’s no doubt that there are many systems that are compatible with Apple products, so our homes can be controlled by iPads and iPhones. Will Apple ever enter the home automation category to potentially become the most dominant company in this area? For now, this is all open ended as we wait for definitive answers from Apple.